Hello, I’m Toshiya Takahashi, a new second-year technical stuff of the University of Tokyo Soccer Club. In this article, I’ll be analyzing the first leg of the CL best-of-16 match between Real Madrid and Manchester City, a match that City won 2-1, but there was a difference in advanced tactical tactics and “strategy”.

Prediction: How will the two teams play?

How we line-up at the Bernabeu!

The key is Real’s left back and both WGs, and City’s CBs. The fact that they started Mendy instead of Marcelo, Vinicius and Isco instead of Bale, and Otamendi instead of Fernandinho, shows that both teams are approaching the game with the mindset of “defense first”.

On the other hand, there is a slight difference in the stance of the two teams. While City will be away from home and think, “It’s OK as long as we don’t lose, and even if we lose, it’s OK as long as we concede fewest goals,” Real will want to win at all costs. This difference will have a big impact on the outcome of the match.

First half: “Special tactics” of both teams

What are the intentions of the two “false nines”? 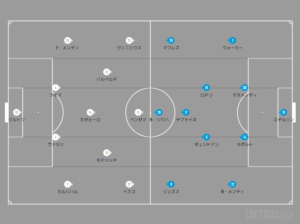 Let’s take a look at how the game will go. Look at City’s formation in the diagram above. Normally, Jesús, the CF, is played as the SH, and B. Silva and Debreuiné are the “false 9s”. I thought this might have both defensive and offensive intentions.

On the defensive side, the intention is simply to increase the strength of the pressing and blocking. The two midfielders with high soccer IQs will probably be played to hold off the two CBs who will be the starting point of the build-up. In addition, Jesús, who was played at SH, has the speed and dedication to cope with Carvajal’s overlaps.

On the attacking side, I think the thought was that they didn’t want to compete decently with Real’s CBs. Varane and S. Ramos are two of the strongest defenders in the world, and even Aguero and Jesús might not be able to beat them in terms of individual physical ability. On the other hand, these two players have the characteristic of “aggressively going forward and attacking the ball”. Pep probably wanted to take advantage of this and use B. Silva and Debreuiné to fish out the CBs and let Jesús and Mahrez jump in diagonally.

However, this offensive intention failed. “Pep” and “Fake No. 9″… that’s Barca’s Messi. For Real, it’s the opponent they were beaten by in the Clasico, and they will fight back. However, for City, this is probably within their expectations. For City, all they had to do was defend.

Real has adopted a straightforward strategy to hinder City’s buildup. All-court man-to-man. This strategy seems simple, but there are a few tricks to it. First of all, no one was attached to the goalkeeper Edelson. Edelson has excellent footwork, and if you put pressure on him lightly , you risk being stripped. That is why they dare to let Edelson free and let him kick long balls with no way out. If you let him kick a long ball, CBs who boast of “qualitative advantage” can easily recover it. In fact, Edelson’s pass success rate was only 66%. Also, it is believed that he did not strictly decide who to mark man-to-man. Real is known for its fluidity in attack, and the rule was probably to grab the closest opponent in transition.

This was followed by Real’s ball possession. In the first half, against Real’s build-up, City pressed in a 4-4-2 formation, with a looser standard on people. Real, on the other hand, played with three CBs in the build-up, including Casemiro. City may have thought that Casemiro and Courtois, who are relatively free with their feet, would be fine to have the ball. After the 35th minute, one of the two CHs would have to step forward to take care of the situation. After 35 minutes, one of the CHs corrects the situation by getting forward and taking care of the ball, while Real maintains their numerical advantage with Modric modulating (Salida Labolpiana).

Real did not pass vertically through the center of the field, but attacked with many side changes. In particular, they played a lot of long balls to Vinicius on the left side, and there were scenes where he and F. Mendy combined to break the game down. However, on City’s right side, there was Walker, who is very strong in defending against opponents. The fact that City managed to finish the first half without conceding a goal was due in large part to his strength. If it had been B. Mendy, I don’t know what would have happened.

On the other hand, on the right side, Isco often squeezed inside, and the overlapping Carvajal was on the receiving end. City will take care of this. Jesús will return and take care of it.

Another important key player in Real’s attack is Isco, which I will write about later.

As I’ve written many times before, it’s all right for City to finish without conceding a goal, and they did just that defensively. Otamendi also made a great contribution to the defence, despite the fact that he was targeted with a vertical pass. Of course, there were chances, and it would have been great if Jesús had scored.

Real on the other hand. All-court man-to-man when pressing, 4-1-4-1 when advanced, middle press/block and two-stepping. By closing the middle, it leads to the side. In addition, Valverde, the tactical weapon in the midfield, responded to the counterattack by showing a stanning transition. Thus, it can be said that the defense worked well. And the attack? It’s a matter of opinion, but the fact that we didn’t score first in the first half had a big impact on our performance.

From the start of the second half, City had several chances, but Mahrez and Jesús were unable to finish them. Then Real had a great chance. Real took advantage of a mistake by Otamendi, who was often targeted in the first half, and hit a short counter. Isco scored the first goal of the game.

However, in the second half, Real’s defensive intensity clearly started to drop. Real had been maintaining high intensity from the first half, but they couldn’t keep it up for 90 minutes. They responded by playing a 4-4-2 with Valverde up a layer, but City’s ball possession increased.

It wasn’t just Real’s reduced intensity that led to City’s pace in the second half. They were more aware of their man advantage than in the first half and pressed hard from the front. They also clearly hit Casemiro with an IH to hinder Real’s build-up.

This is where the City’s “tactical weapons” came into play.

The appearance of Sterling

At this point, I think Zidane had several options: keep the one-goal margin or go for more goals. Will it be Vinicius or Isco who goes down? Will it be Bale or L. Vazquez? What this change means is that Isco will continue to be needed as a staging post in the build-up, and we will go for the second goal with the ‘spear’ on the left. A point against City is not a safety lead. I think he was trying to put pressure on City by putting Bale, who can hold his own on the counter.

What was a miscalculation for Zidane was that Bale’s intensity was lower than he expected. In the end, he couldn’t make a difference in attack, and his lack of strength in defense was a “weakness”. Sterling, on the other hand, used his speed to cut through the Real defenders. Jesús’ equalizer came five minutes after the change. It was a super cross from Debreuine.

It was a penalty kick that Sterling scored after beating Carvajal. Real rushed to bring on L. Vazquez and Jovic, but it was too late. With Ramos out of the game, the second leg will turn be a tough one for Real.

A big difference in “strategy”.

Intentions behind the appointment of Isco

While the pre-match predictions for the starting lineup predicted the use of Bale and L. Vazquez, Zidane came up with Isco in the right WG. If Isco is used, he will be expected to generate ideas during the breakaway and as a destination in the build-up. This role in the attack was more than fulfilled. With Modric as the starting point of the buildup, the receiving midfielders are Valverde and Isco, who looks like a freeman. Moreover, City had just been used to frequent gaps between the lines in the previous game against Leicester. It was the perfect environment for Isco.

For Real, they had no choice but to use Isco to win. You can see the agony that Bale would kill the defense and L. Vazquez would probably not be able to attack.

In the last big match, the Madrid derby, Zidane played Isco. Zidane played Isco in the Madrid derby just before the Madrid derby, so Pep must have figured that he would play Isco again in this match. What will happen if Isco is used as WG? The side lane will be filled by one SB. So, Pep has been using “players who can shine in the side” in the side. (You can see this in Zinchenko’s absence from the bench and B. Silva’s use in CF. In fact, on Real’s right side, there were many scenes where Carvajal alone looked after Jesús and Mendy. Carvajal was the only player on the right side of the field, and he must have been very tired. I can’t blame him for the penalty shot, either, although it looked like he was easily beaten.

Summary: For the second leg

In the end, it was the home-and-away system and the difference in leadership between the two coaches that decided the outcome of the game. With Sterling as their trump card, it was enough for City not to concede a goal, and for Real not to feel comfortable with a one-goal deficit. However, I don’t know what would have happened if L. Vazquez had been introduced instead of Isco.

What also hurt Real was that the high intensity did not last long. This may be the reason why Real has adopted the tactics of pulling back and defending against Barca in the Clasico.

How will the game go in the second leg? In order for Real to advance to the top eight, they need to win and score. There is a possibility that they will draw back like they did in the Clasico. But if they do, it will be a ball-holding game, which is City’s specialty. And with no key defenders in the squad

Thank you for reading this article. I hope you enjoyed the analysis and writing. I would like to explain a little about the technical staff of the Club.

The technical staff is a unit that supports the players from a tactical standpoint by providing feedback on matches and scouting (tactical analysis) of opponents using tools such as hudl and CATAPULT, which are also used by professionals. They also support the team by filming practices and matches and giving advice to players. In a sense, they are the “brains of the game” and are the core of the tactical-oriented game. It doesn’t matter if you have soccer experience or not. If you are interested in technical skills after reading this article, I would be happy to hear from you.