Hello, my name is Inada. My name is Inada, and I am a fourth-year technical staff member of the University of Tokyo Association Football Club.
The purpose of the Technical Unit is to support the team to win through “analysis”, and we currently have 18 staff members. Our main activities include qualitatively and quantitatively evaluating the matches and practices of opponents and our own team, making tactical decisions with the coach, and providing feedback to the players. With the ability to qualitatively analyze soccer as a foundation, I have recently been focusing on quantitative analysis as well. This is what we call data analysis. Kinoshita (https://twitter.com/keigo_ashiki?s=21), the head of data analysis for the third year of our club, has written an article about the data analysis we are doing, so if you are interested in learning more about the data analysis of our team, please visit the following link.

In this article, I would like to introduce my product, “inaco”. inaco is a wearable device which measures running distance, average position and etc., with its installed GNSS (GPS) and accelerometer. It can obtain live data as it is able to connect to wi-fi. 私は工学部の機械工学科に所属しています。Last year, there was a lesson where we had to create something from scratch, which was called “creative design exercise”, and in that lesson I chose to do an IoT (Internet of Things) exercise. inaco is what I produced in that lesson. It is a prototype, and below are the images of inaco. I am still working on this device after the exercise has finished. 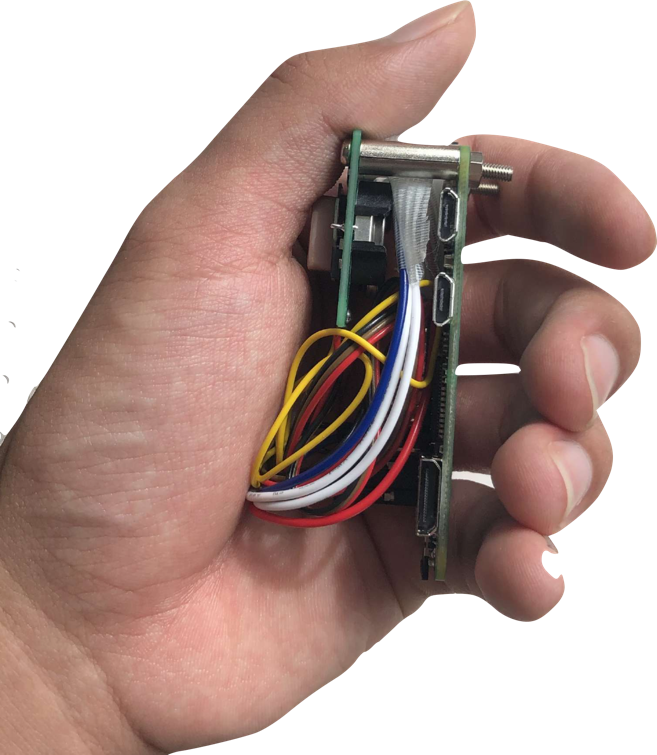 The details of the device are described below, and it is also summarized in a 2-minute video, if you would like to watch it.

How the device was created

Currently, we are using EVO from catapult as a GPS wearable device. In the technical unit, together with the physical unit, we are using data of coordinates to adjust training amount in order to improve physicality and to prevent injuries, and as tactical data for analysis.

However, this device is a slightly older model and it cannot obtain live data, therefore we were unable to measure running distances in-game. Furthermore, there were many games last year that our physicality played a large part for our loss, and as a technical staff I felt the need for a faster way to acquire physical data.

Last November, I decided to create a GNSS (GPS) device that can obtain live data in my “creative design exercise” lesson, where we were ask to produce a device of our choice. By acquiring live data, there is no need to transfer data from the device to the PC, and the data will be as fresh as possible.

inaco mainly consists of three parts. The GNSS module (GPS・GLONASS・receives guidance signals), 9 axes sensor (3 way accelaration/3 way gyro/3 way magnetic sensor), and the Raspberry pi Zero WH. Insert these into a housing with a battery and the device is complete. 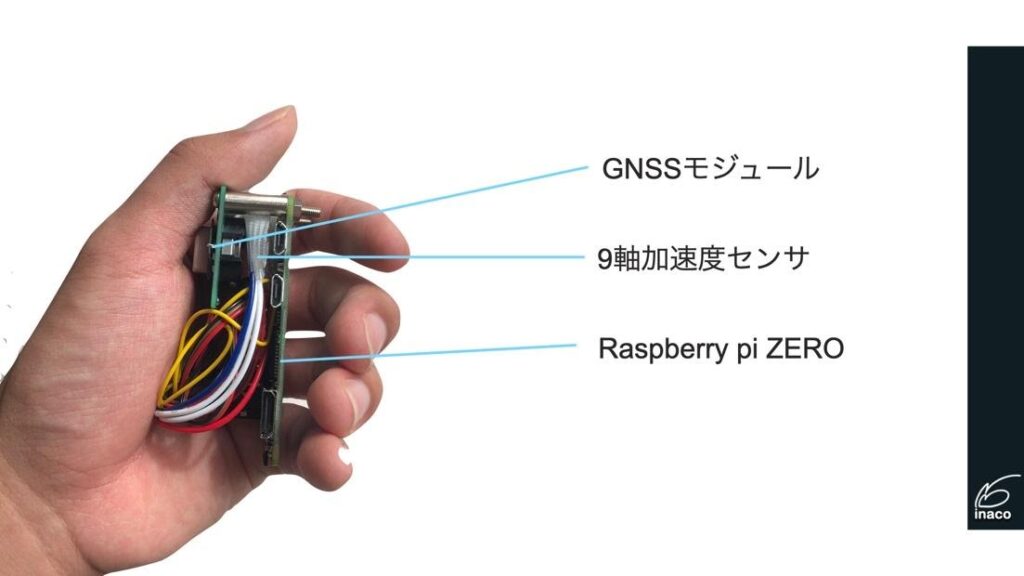 The mechanism of the software is as follows; The data acquired by each sensor is processed by a microcomputer called “Raspberry pi”, and is sent to the Cloud using wi-fi. Then in the Cloud, the data is processed and analyzed by my original calculation method. Finally, that data is sent to devices such as our phones or PCs. 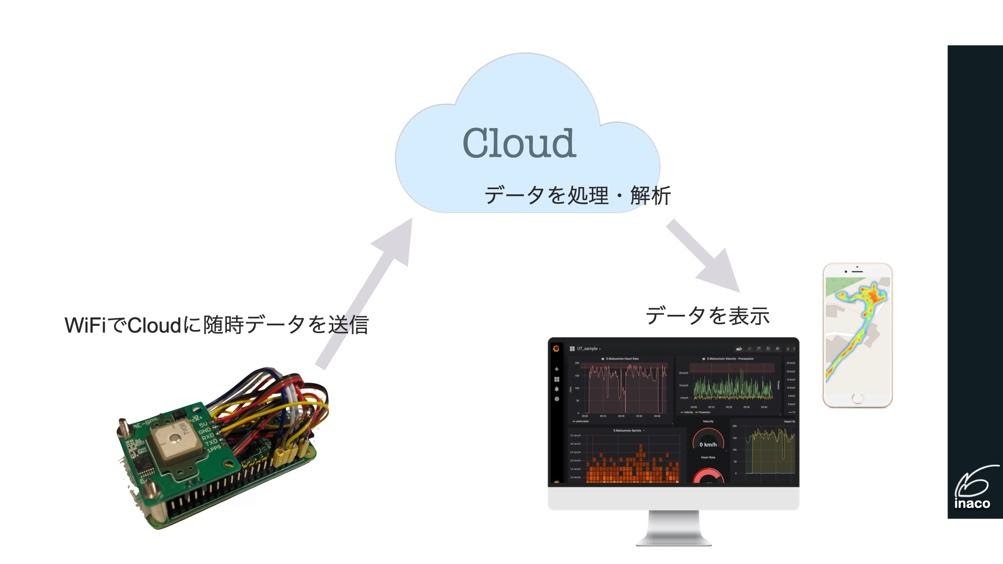 This wearable device, inaco, has not yet been put to practical use. We are planning to complete it in the next few months.

In the production of inaco, I always consider the importance of the user interface for the coaches and athletes who will actually use it. If the output data is difficult to read or understand, the data, which should be valuable only if it is used effectively, will not be conveyed to the coaches and athletes, and thus will be worthless. In addition to coordinates, the fact that many types of data can be acquired, such as acceleration and heart rate, and that many types of data can be calculated through various processes is meaningless in itself. It is just “potentially nutritious food” rolling around.
As mentioned in Kinoshita’s article above, there is a story that compares data analysis to cooking. The data are the ingredients, we in the technical unit are the cooks, and the coaches and players are the customers. The chef needs to process the ingredients and “make it into an attractive dish.

The Data Analysis Team of the Technical Unit has been able to calculate various data, especially in the last six months or so. However, there is still a lot of immaturity when it comes to “communicating data” to coaches and players. As with the above, if the data is not conveyed to the coaches and players in a meaningful way, then the data as “analysis” has no value.

I believe that the difficulty in communicating data, especially in soccer, lies in the fact that data is fundamentally open to interpretation. Machines are simpler than soccer in modern understanding. A typical machine has a predetermined number that it needs to meet, with some margin for error, and that number = data that doesn’t have a lot of room for interpretation. However, soccer is different from machines. For example, even xG (Expected Goals), which is easily thought of as the expected value of goals, needs to be interpreted from a qualitative soccer perspective in terms of its purpose as an xG indicator and its model. Raw data, such as the number of crosses and passes, does not require interpretation of the data itself, but it does require interpretation when considering what the data should be used to convey. This interpretation of data is one of the roles of our technical staff. We give “nutrition” to the data and make it into a “delicious” dish.

In a sense, the technical staff involved in the data is the interface between the data and the coaches. Although we are still in our infancy, I hope to implement a user interface in inaco that fully utilizes the experience of myself and the data analysis team to date.

When I first joined the club, I was told that joining an athletic club that belonged to the University of Tokyo A-Style Kickball Club meant a lost opportunity. I interpreted this to mean that being a member of a club would kill my academic and other experiences that I should have as a university student. However, I am now able to apply mechanical engineering to soccer and vice versa. This was an opportunity that I would not have had if I had not joined the soccer club as a club activity at university.

Of course, the technical unit spends an order of magnitude less money on analysis software and hardware than the top teams in Europe. Also, compared to professional analysts, those of us who study at universities do not have as much time to spend on soccer. However, this does not mean that we have no time, no money, or nothing at all. We are close to universities where various researches are conducted, and because we are students rather than professionals, we have 18 staff members in the technical unit of our team.

The University of Tokyo’s brand seems to be gaining popularity in various fields these days, but its main focus is academics, and with 18 staff members, there are a wide variety of fields for them to study. With 18 students, there are a wide range of fields for them to study, and as a comprehensive university, there is no reason why they can’t make use of their cross-disciplinary study of science and humanities in soccer. Although inaco is only a small part of the University of Tokyo’s x Soccer program, the Technical Unit and many other units ( In the future, the technical unit and many other units (ground operations, community, physical, promotion, recruiting, administration, human resources, accounting, international activities, public relations, strengthening, game management, club environment, Tokyo Gakuenren, etc.) will use what they have learned to contribute to the development of the club, which has been in existence for over 100 years.

Of course, it is not inevitable to link soccer with university academics. My primary goal is to win the league and to help the players grow, so in the short term, there is no need to link soccer with university studies. However, from a medium- to long-term perspective, I believe that the University of Tokyo Ashikaga Kickball Club, which aims to become an organization that produces human resources who will play important roles in various scenes of the soccer world and society, based on the theme of integrating and practicing the power of thought and passion, can establish a genuine University of Tokyo Ashikaga brand by making use of its own unique aspects.

Last week, we also started to create an environment where we can acquire panoramic images. Recently, I have seen some universities taking panoramic images, but such cameras cost about 100,000 yen each. Of course, buying a camera would be a good idea, but in order to reduce the cost of analysis and to maintain the scalability of the analysis, I am planning to develop image analysis in the medium to long term.

We do not know what the future holds for quantitative analysis of soccer. Today, the environment for high-capacity communication called 5G is being developed, and the performance of computers is improving every day. I believe that it is only a matter of time before we will be able to perform analysis on a large scale in real time. For example, a few years from now, it may be possible to instantly analyze the kicker’s foot and body movements in a penalty kick image, mechanically predict where to kick, and tell the goalkeeper where to kick before the ball is kicked. (Although the goalkeeper’s own direct perception and judgment may still be superior.)

I will be leaving this department in 6 months as I am retiring, but I hope that the technical unit will continue to be able to cope with major changes/progress.

This time, inaco, which we prototyped in class, received an award for excellence in the IoT exercise. My department’s online exhibition, Techno Factory 2021, features inaco and other products made by mechanical engineering students. If you are interested in manufacturing, please take a look!

The Technical Unit of the University of Tokyo A-Style Kickball Club will continue to work daily to broaden and deepen our “analysis”.

At the end of this article, I would like to express my gratitude to the many people who have supported us.

Thank you for reading to the end.